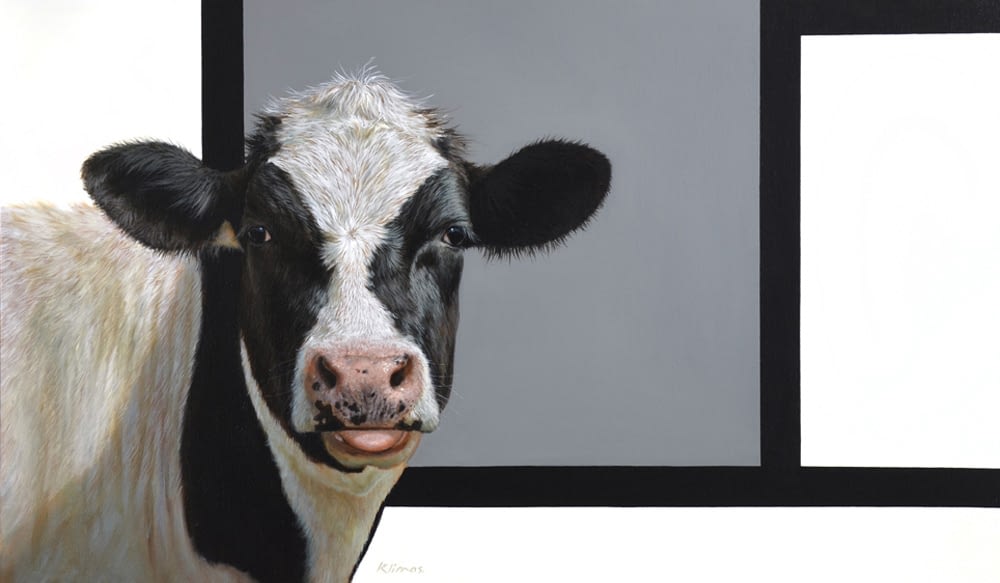 Born in 1970 in the Netherlands, Alexandra Klimas is a self-taught artist but looking at her artwork, it seems like an impossible proposition. Klimas is a hyperrealist painter, her works look unnervingly real, her subject matter tangible, and were it not a painting, probably audible. The artist’s models are animals, some of her favorite are black-and-white cows, and in her oil on canvas pieces they all become portraits. They are given names, and with that, force the viewer into an intimate relationship, which is precisely the goal of this animal-loving painter. It also sets her apart from others who painted animals, and there were many. Animals can be found in art from any epoch, but usually as part of the background. Here they are center stage, right in front of our eyes, impossibly real, while at the same time clearly symbolic. They may have names, but they stand for the entire species, as well as for our human relationship with animals. Klimas began paining early, drawn to landscape and space. She spent a lot of time on her grandfather’s farm, enamored of nature, and in particular, the animals. Set against tranquil meadows, the cows in her portraits appear as carriers of that message, and perhaps one of their own personal, unencumbered, contentment. The dialogue between the artist and the model manifests itself in these paintings as an intrinsic emotional component of the composition, altering the reading of the work. There is an aspect of protest as well, despite the bucolic setting in many of the paintings. Due to environmental concerns, cows in Holland are not allowed on grass, thus the cow paintings can be seen as the artist’s commentary on the legislation, a commiseration with the animal, and a paean to a disappearing landscape.

Her choice of medium is inexorably linked to her subject matter; oil on canvas possessing the indispensable qualities for such fine execution. Unlike photorealists, Klimas is purely a painter, and as mentioned earlier, an autodidact, making her creative achievement even more impressive. It also, in a subtle way, adds to the personal aesthetic of her work. In the annals of art history, the chapter on Hyperrealism is populated with myriad world-renowned artists, and ultimately what sets each one apart is the subject matter, far more than the quality of the work, which should never be in dispute.

Such is the case with Alexandra Klimas’ paintings that strike with the high caliber of execution, the astounding precision and adherence to pictorial demands. The lighting is also quite spectacular in many of the paintings, the dramatic contrast of black and white, both on the animal, and as part of the background, creating a feel of Old Masters, of a mystery going beyond the image.

Other farm animals appear in Alexandra’s canvases, and each is treated with the same painterly affection. But there is no denying, that the latest series, with its stoic but theatrically expressive model – the cow – is in a league of its own, and will further the artist’s already prolific career.

We ship worldwide and usually artworks are delivered within 28 days from the order. However, if your country is on the international fraud black-list, this will prevent us from taking your order. We apologize for any inconvenience.

Coverage for Loss or Damage

All shipments are fully insured. We refund 100% payment for artworks damaged in shipment.

You can cancel your purchase at any time either before or up to 24 hours after delivery by e-mailing us at info@kontemporaryart.com. Your product must be complete, and in ‘as new’ condition as you received it in.
You will receive a full refund upon satisfactory return of the goods, and the cancellation is free of charge provided you inform us that you intend to cancel within this 24 hour period and return the goods within a reasonable period of time, postage for the return of the goods will be required to be made by the customer.  Please note that we cannot cancel your purchase when you are unable to provide proof of purchase or the goods have been damaged since delivery.Refunds are dealt with on a case-by-case basis and are issued within 7 working days of the item being received back to the gallery.  A full refund would be for the amount showing on the buyers invoice.

Notification of Shipping and Tracking the Order

After your order has been placed we will confirm receipt of the order and keep you informed as to the progress of your order. Then we will email or telephone you when the order has been shipped with the expected date of arrival. If for any reason you do not receive correspondence, please contact us.  Shipping times vary depending on location and carrier service. The carrier will provide an estimate of delivery time at the time of shipping. If that date has passed or you have any other concerns about your order, please contact us and we will track your shipment.

There are no duties to pay within North America on art. Internationally, whilst in our experience it rarely happens, depending on your local customs office you may be required to pay duties and taxes, usually cash-on-delivery. Kontemporary Art has no control over or responsibility for this, and has no way of determining what your duties and taxes may amount to. We encourage you to contact your local postal service or customs bureau for more specific information.

Our leasing proposal is addressed to both corporations and individual collectors. Kontemporary Art makes fine art more accessible by reducing the client’s financial commitment, as well as their investment in terms of time and logistics. Undeniable advantages makes of our leasing plan the most attractive and efficient financial tool to enrich art collections at any level.

Conservation of capital: The capital conserved while leasing art as an operating expense can be utilized for other capital expenditures.

Conservation of credit: A lease is not a loan. Borrowing reduces lines of credit. Leasing is an operating expense and hence, allows the customer increased borrowing capacity.

Off balance sheet financing: An operating lease keeps the debt, and the corresponding asset, off the company’s balance sheet. Therefore, borrowing debt covenants are circumvented, financial ratios are enhanced and borrowing capacity is increased.

C$ 25 buy-out price before sales taxes in the province where you live. 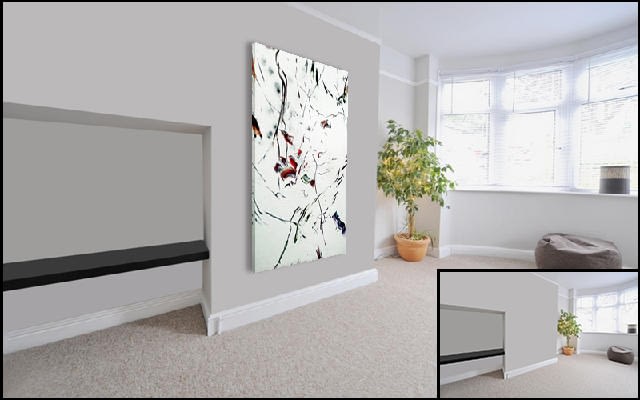 This free service will let you visualize your artwork of choice in your home using digital technology, while avoiding physical transportation and installation of the painting. This is the most realistic and immediate way to see what the artwork will look like in your home or office.

Simply send us a digital photo of the wall space in your home or office where you envision placing one or more artworks available on this website. The photo should be taken in full daylight and of best quality possible. We will return your image to you with your artwork digitally hung for your consideration. It’s that simple! This unique service is offered at no cost to you.

SEND US A PHOTO